RAIDS DURING THE WEEK

We use particular voice channels in this discord as “Waiting Channels”, where you can jump in (mute/deafen yourself if you’d like), and your name will appear in the channel as part of the “waiting list”. This allows people to see that you are actively looking for a raiding team. Any teaching raids that happen outside of workshops are at the discretion of Mentors i.e. there are no set times, you’ll just have to wait for a mentor to volunteer to take some learners. You are, of course, welcome to try your hand at raiding with other less experienced people if mentors/teachers are not available.

If you are new, keep an eye on #mentor-raid-times, as Mentors will post here when they are going to be teaching. The difference between the channels is explained below the images.
If you see people in a voice channel who are already raiding, please do not join the channel and ask if you can join, especially if it is a learner channel. It is incredibly disruptive and will annoy people when they are trying to focus on raiding/learning. INSTEAD, you can @ them in chat and ask them if you can join their next raid, or DM them. This will give them a notification, which most people check after their raids, and will allow them to raid uninterrupted. 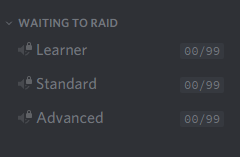 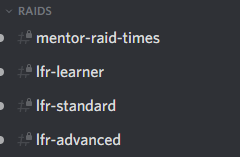 Learner raids are for people that want to teach or learn raids. Either for learners who want to have things explained to them, aren’t confident in some things, etc., or for people who don’t mind teaching/guiding newer people. Mentor raids are held sporadically through the week whenever mentors are willing, with scheduled workshops once a week.

Standard raids are raids where everyone participating is expected to know what to do without explanation. As long as you are 5+ kc then you can join these; if you don’t need to be guided or taught the main bosses and Olm, then you will be welcome in most Standard raids.

Advanced raids are for people who are trying to do faster raids and who will probably want only experienced people with them. Generally you’ll be expected not to die. Advanced raid requirements are set by whoever is running them. Some people won’t care as long as you don’t die and are fast, while some people will only want 120cmb+, DWHs, tbows, etc. Please make sure you talk to the people you’re about to raid with to figure out if you will be up to their standard

Max. Eff. (Maximum effort/efficiency) are raids where people are very experienced and are trying to get the most amount of points in the least amount of time. You will generally be expected to know how to skip specials, do all bosses, be familiar with alting, etc. You can use the #lfr-intro-to-max-eff channel if you would like to learn how to do max eff raids.